The number of people aged 85 and over needing 24-hour care is set to double, says a new study, as an expert warns the care system is "at breaking point".

The study, published in the Lancet Public Health journal, analysed the projected health needs of the elderly in England between 2015 and 2035.

It found that the number of 65-year-olds and over needing round-the-clock care is also set to rise by a third.

The government says adult social care reforms will be set out in the autumn.

The modelling study, carried out by Newcastle University and the London School of Economics and Political Science, highlighted the fact that the fastest growing demographic in the UK is elderly people over 85, whose numbers are projected to more than double by 2035, increasing by 1.5 million.

Many of these elderly will develop multiple long-term health conditions, such as dementia and diabetes, leading to increasingly complex care needs.

The number of over-85s requiring help throughout the day with tasks such as dressing, bathing and going to the toilet is estimated to almost double to 446,000 by 2035.

By the same time, the experts predict that a million over-65s will need similar 24-hour care.

'I feel utterly alone and helpless'

Kate Gobel's 86-year-old mother has dementia but lives in her own property. The family pays over £3,000 a month for private care.

Kate says she still has to provide a lot of care for her mother, and the situation is having a significant impact on her too.

"NHS care is for three half hour slots, leaving no time to bathe her or prepare meals.

"I do have a good care system in place but I am mindful of the fact these circumstances could change in an instant.

"My mother didn't qualify for some things until she was over 85 because she wasn't physically disabled, and there's too much form filling to see if you do qualify for anything.

"She also doesn't get taken to hospital or GP appointments - something that would be really helpful."

Kate says the lack of help is affecting both her and her mother - and she worries about the future.

"I feel utterly alone and helpless. She is in her own home, as she wishes, but it is her prison. She is lonely and depressed.

"I try and visit as often as I can, but we live 13 miles apart, and I have a job and family of my own.

"I have to manage her household bills, repair things in her home, and block cold calls on the phone and front door. I'm constantly fire-fighting.

"Not only does all of that cost money, but it's affecting my own mental health too."

Prof Carol Jagger, from the Newcastle University Institute for Ageing and senior author of the study, said the number of unpaid carers is in decline.

She warned that relying on unpaid family carers was not sustainable and said: "The challenge is considerable.

"Our study suggests that older spouse carers are increasingly likely to be living with disabilities themselves.

"On top of that, extending the retirement age of the UK population is likely to further reduce the informal carer pool, who have traditionally provided for older family members."

Nick Forbes, senior vice-chair of the Local Government Association, warned that more investment was needed to avoid a crisis.

"The system is at breaking point, ramping up pressures on unpaid carers.

"There is an urgent need to plug the immediate funding gap and find a long-term solution to how we pay for adult social care."

The study also noted that there were increasing numbers of adults aged over 65 living independently, with a rise of 60% forecast by 2035.

However, as they got older men were more likely to remain independent, whereas women will spend almost half of their remaining life with low dependency needs and more years needing intensive 24-hour care.

Prof Jagger said this highlighted the importance of focusing on disabling long-term conditions, such as arthritis, that were more common in women than men.

"The rise in obesity is hitting women harder than men, and men have probably benefitted more from the reductions in cardiovascular disease.

"Women also suffer from a decline in muscle mass, and so I am stressing the importance of physical activity and maintaining strength and balance."

She added: "This expanding group will have more complex care needs that are unlikely to be met adequately without improved co-ordination between different specialities."

The report also predicts that the number of people aged over 65 with dementia and at least two other diseases will double by 2025 and treble by 2035.

The report comes as the government is considering how to reform social care in England.

In June, a funding rise was agreed for the NHS, in which its budget will increase by £20bn a year by 2023.

A Department of Health and Social Care spokesperson said: "In the autumn we will set out our plans to reform adult social care alongside our long-term plan for the NHS, so we can address the challenge of our growing ageing population head on and ensure services are sustainable for the future."

Caroline Abrahams, charity director at Age UK, urged the government to meet the challenge head-on, and said the burden on families was too great.

"The problem is that today there are far too few really effective joined-up services, and social care is in sharp decline," she said.

"The government's top priority must be to steady the ship and then produce a great set of proposals later this year to give our older population confidence they can get the help they need." 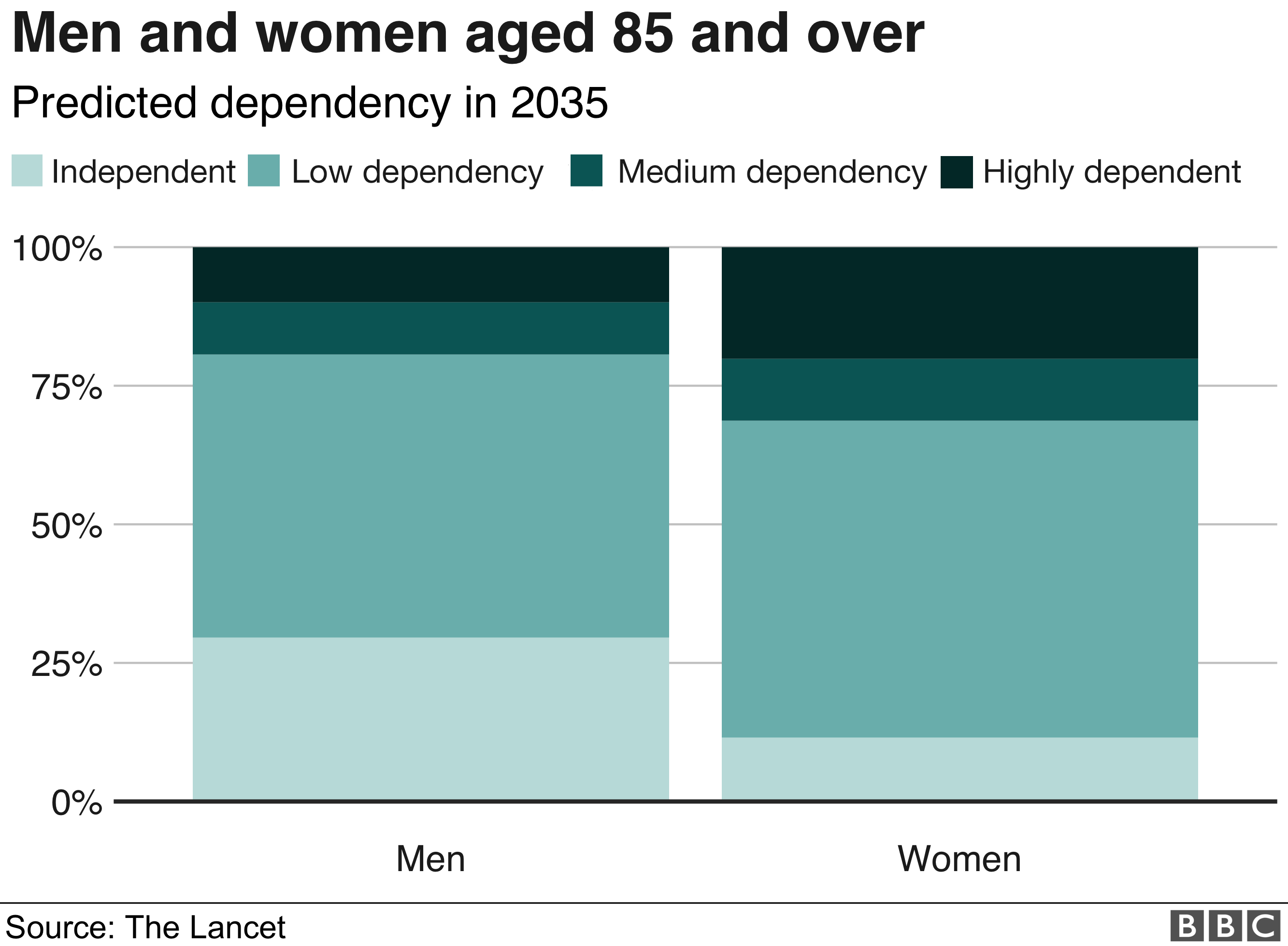 bbc.com
elder people
If you notice an error, highlight the text you want and press Ctrl + Enter to report it to the editor
2 views in january
No recommendations yet
Telegram
Your recommendation is submitted.
You have already recommended that.