The death of a seven-year-old boy killed in a house fire is being treated as murder, the Met Police has said.

Joel Urhie was found after a "very severe fire" at his home in Adolphus Street, Deptford, south-east London, in the early hours.

Det Supt Jane Corrigan said the fire was believed to be arson but Joel was unlikely to be the target.

"It is difficult to imagine a seven-year-old is the motive for the attack," she said.

"[He] has lost his life in what should have been the safest place for him, his home," she added.

"We believe that the fire was started deliberately but at this stage I am unable to go into any further detail due to operational reasons."

There are no suspects at the moment, the Met said.

Joel's family said he dreamed of becoming a firefighter.

Speaking outside the house, Mr Urhie described Joel as "a very lovely boy who was just loving life".

The 54-year-old said he moved out of the family home about five years ago but had been called at about 04:00 BST to say there had been a fire.

"When I came, the first thing I saw was my daughter inside the ambulance. They said, 'Joel's dead', and there's nothing I can do about it," he said.

Police officers and firefighters were called to the house shortly before 03:30 BST on Tuesday .

It took more than 75 minutes to bring the flames under control and surrounding homes were evacuated as a precaution.

The ground floor of the house was badly damaged by the blaze, as well as the first floor and the stairs.

No-one was in the house at the time apart from Joel, his mother and sister, police said.

Ms Urhie and her daughter jumped to safety from the first floor.

They are recovering in hospital, with non-life threatening injuries, where they were joined by Joel's brother Sam, 21. 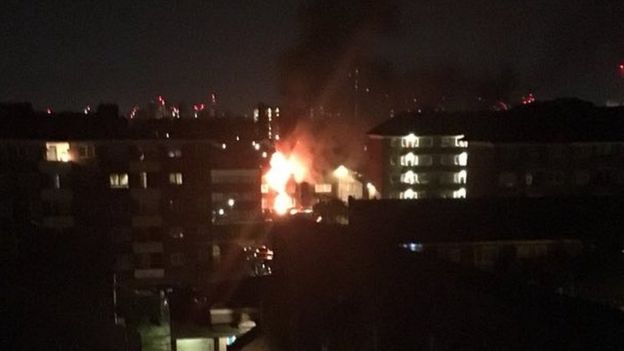 Family friend Grace Gbenedio, 56, said she rushed outside her nearby home after hearing screams.

Mrs Gbenedio said she held Joel's mother, who said: "My son is inside."

"She was on the floor crying, 'help, help, help'," Mrs Gbenedio added.

"The fire was just too much, like a curtain, no-one could go in or out," she said.

"We heard the last blast of the glass and she just collapsed."

The BBC has identified more than 90 murder investigations which have been launched across the capital this year.

bbc.com
London Deptford
If you notice an error, highlight the text you want and press Ctrl + Enter to report it to the editor
1 view in january
No recommendations yet
Log in ,
to rate and recommend
Telegram
Your recommendation is submitted.
You have already recommended that.