Darts fan filmed sliding down Tube escalator in viral clip viewed 10m times 'I had 10 pints and thought, why not?'

After downing ten pints of beer at the darts, it probably seemed like a good idea - writes standard.co.uk.

But as these images show, Freddie Andrews’s decision to slide down a Tube escalator backfired in spectacular style.

Dressed in a football kit, the 22-year-old from Tonbridge, Kentleapt on to the metal chute between two escalators as a prank.

But it quickly went wrong as he first smashed his private parts into one of the emergency stop buttons - while his friends laughed hysterically.

As he gathered pace, he then slid another 40ft before hitting a metal sign and was catapulted headfirst into the opposite escalator, landing at the feet of a surprised commuter.

Asda worker Mr Andrews said he instantly regretted the stunt as he began sliding down, but was unable to stop himself.

He told the Standard: “I was that drunk - I’d had about 10 pints - the escalator was free and I thought, ‘why not?’

“It was faster than I thought it would have been. But as I was sliding I couldn’t stop myself and had no choice.

Mr Andrews and friends were on their way home from watching the PDC World Championships at Alexandra Palace.

He said at the time, he did not feel any pain because of how much he had had to drink.

However the next day, he was barely able to walk.

“I was so drunk I did not feel a thing until I woke up yesterday and could not move.”

He added: “My family think I was an idiot. But now it’s happened they think it’s really funny.

“I wouldn’t recommend it to anyone else though.”

The video, which has gone viral, has been viewed online nearly 10 million times. 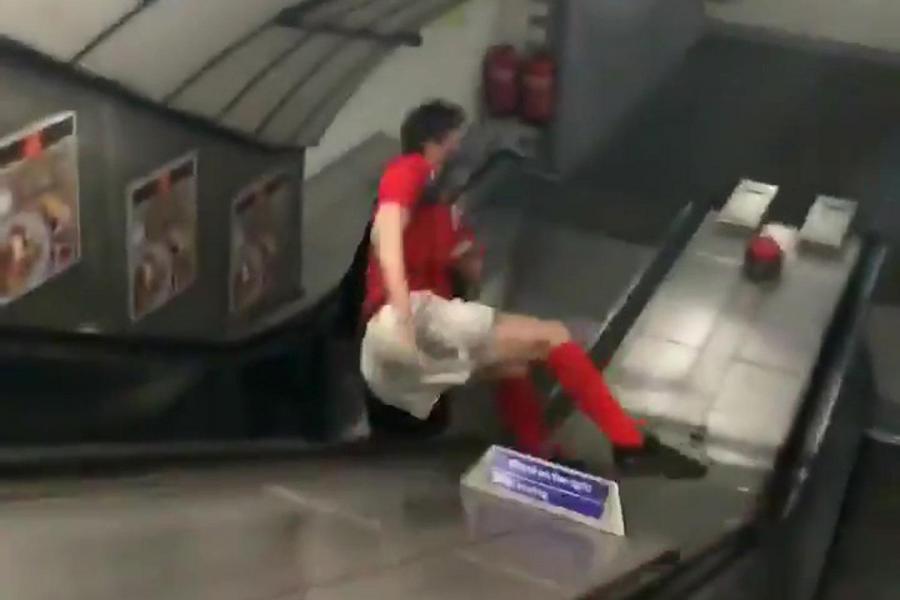 London Underground has previously criticiseds people tempted to take the quick way down.

A spokesman said: “Safety is our top priority and pranks like this are dangerous for not only those involved but also to other customers.

“We have frequent PA announcements reminding customers to be careful when using escalators, and we also run safety campaigns throughout the year to encourage customers to take care whilst traveling on our network.”

Read also more news of London on our site.

standard.co.uk
slidingdownTubeescalator drunk idiot
If you notice an error, highlight the text you want and press Ctrl + Enter to report it to the editor
Be the first to rate
(0 ratings)
No rates yet
5 views in february
No recommendations yet
Log in ,
to rate and recommend
Telegram
Your recommendation is submitted.
You have already recommended that.

fabrika.london
WAH LONDON LTD
Add company
age-restriction-popup-content
Do you think this is an error?