Behind the Scenes at London's Infamous 'Knowledge' Schools

Knowledge Point, North London.Being in the Knowledge schools is kind of like being in a monastery; all around you people are calling routes and road names. To the uninitiated it sounds like a mantra.

If you want to drive one of London's iconic black cabs, you'll need to take the Knowledge – an exam terrifying in its vastness. Aspiring taxi drivers must learn every street within a six-mile radius of Charing Cross – its name, the direction it runs, any restrictions and any points of interest along the way, such as restaurants, hotels, bars, embassies, hospitals, churches or, really, anywhere a passenger may conceivably ask to go. It typically takes students four years to pass, and they fund their own way through it - writes vice.com.

I was interested why, in the age of Uber and Google Maps, people would still put themselves through this process, and what it's like to do so. London has a bunch of Knowledge schools, and I spent time this summer in the three biggest, photographing the students and interviewing them about their lives as "Knowledge Boys" and "Knowledge Girls", as those who take the exam are affectionately known. Of course, since I was there, TfL have taken the decision to not renew Uber's London license – a victory for the cabbies who protested the app-based taxi service, and a massive boon to those I met, a vindication of their choice to tackle the Knowledge in the first place.

This is part of an ongoing photography project that will eventually be released with a long-form essay, but watching the debate that has sprung up in the wake of TfL's decision, I was struck by how little the Knowledge was mentioned and thought it would be worth sharing a few of the photos now. 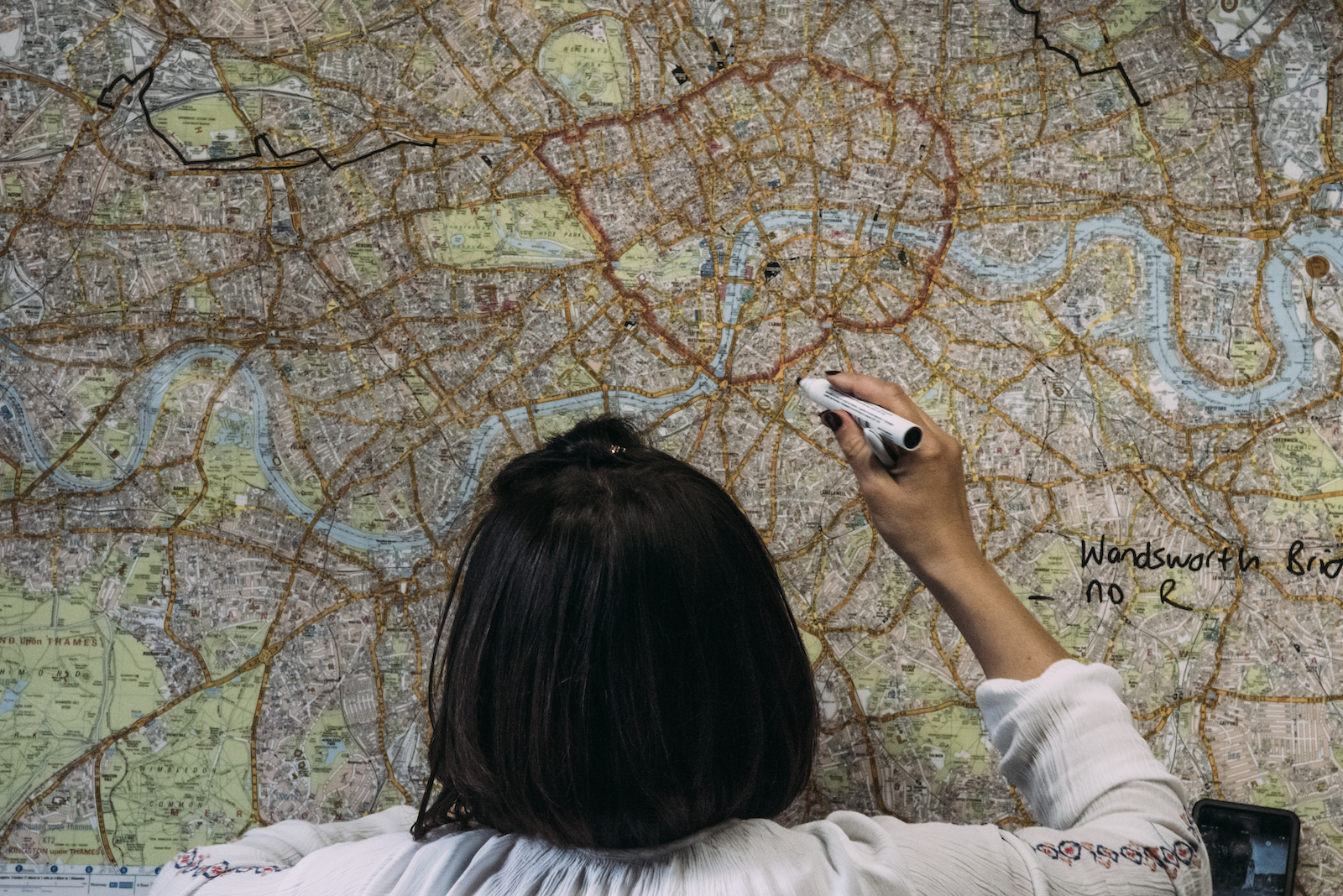 The first thing you notice in any of these schools is the fact that a map of London is omnipresent. Students sit in front of laminated maps which are A0 in size (47.6 x 38 inches) and draw routes across them in felt tip pen. There are two main ways that people study for the Knowledge; the first is being out on a bike or in a car "pointing" – travelling along predetermined routes and noting down all the roads, restrictions and points of interest along the way. The other way is to be in the school alone in front of the map, or working with a partner, calling points; one person will act as the examiner, giving two points, and the other will call out the route they would take, which is then drawn on the map and measured against a straight line drawn between those points as the crow flies. The idea is to be as close to that line as possible. 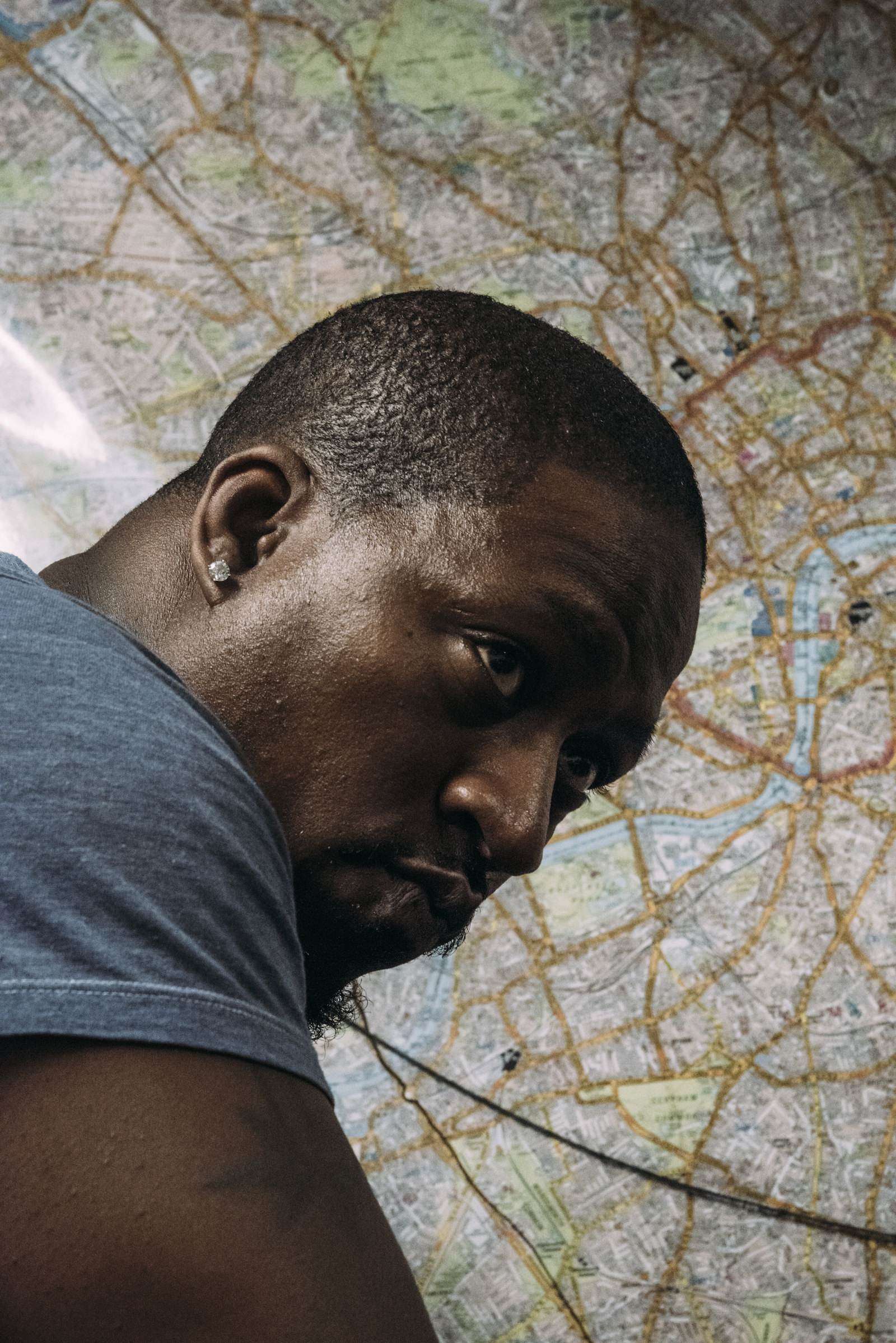 Kingsley Russell has been studying for the Knowledge for just over three years. He's a carpenter, and when I asked him why he was studying for the Knowledge he said he was doing it because it was a trade – "My grandfather always told me you have to have a craft." Where Knowledge Boys and Girls differ from Uber drivers is that, by studying for this exam, they gain a completely unparalleled understanding of the city. A lot of people who pass the Knowledge go on to study for the Blue Badge – the official London Tour Guide permit – because they already have such an intimate connection to the history and flow of the city. The sad thing about the Uber decision is not just that 40,000 people might be out of work, but that they will have little to show for their time working for Uber, except for all hours they put in. 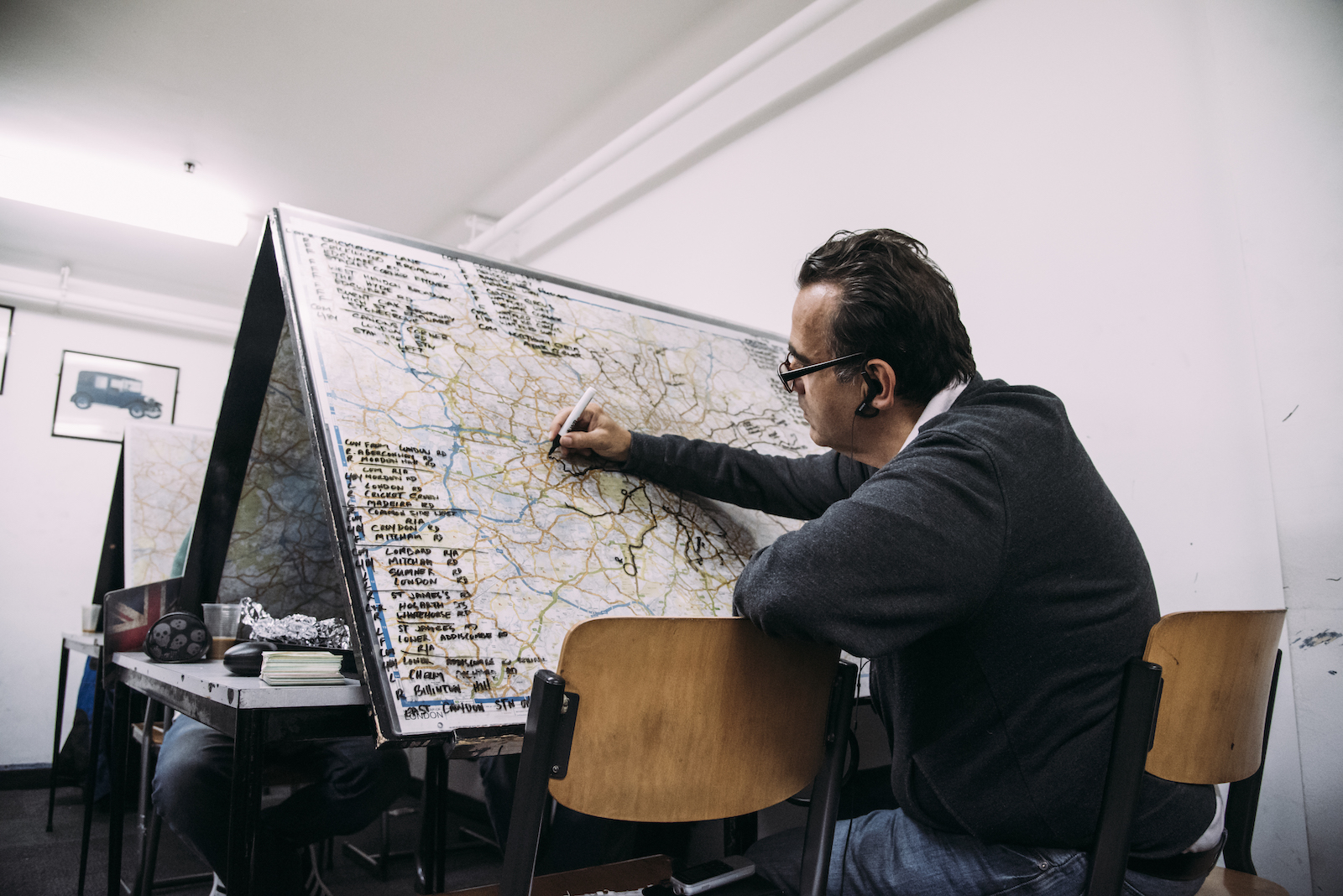 Studying for the Knowledge can be incredibly lonely. Very few people get what goes into it; it's all consuming. One cabbie I spoke to said it nearly cost him his marriage; for two years, the only thing he could think about was the map. When he'd go on a date with his wife he would just be thinking about every street they passed on the way to the restaurant, and whether or not you could turn left out of them. He said it got so bad he used to watch reruns ofThe Bill, to see if he could spot how the roads had changed. 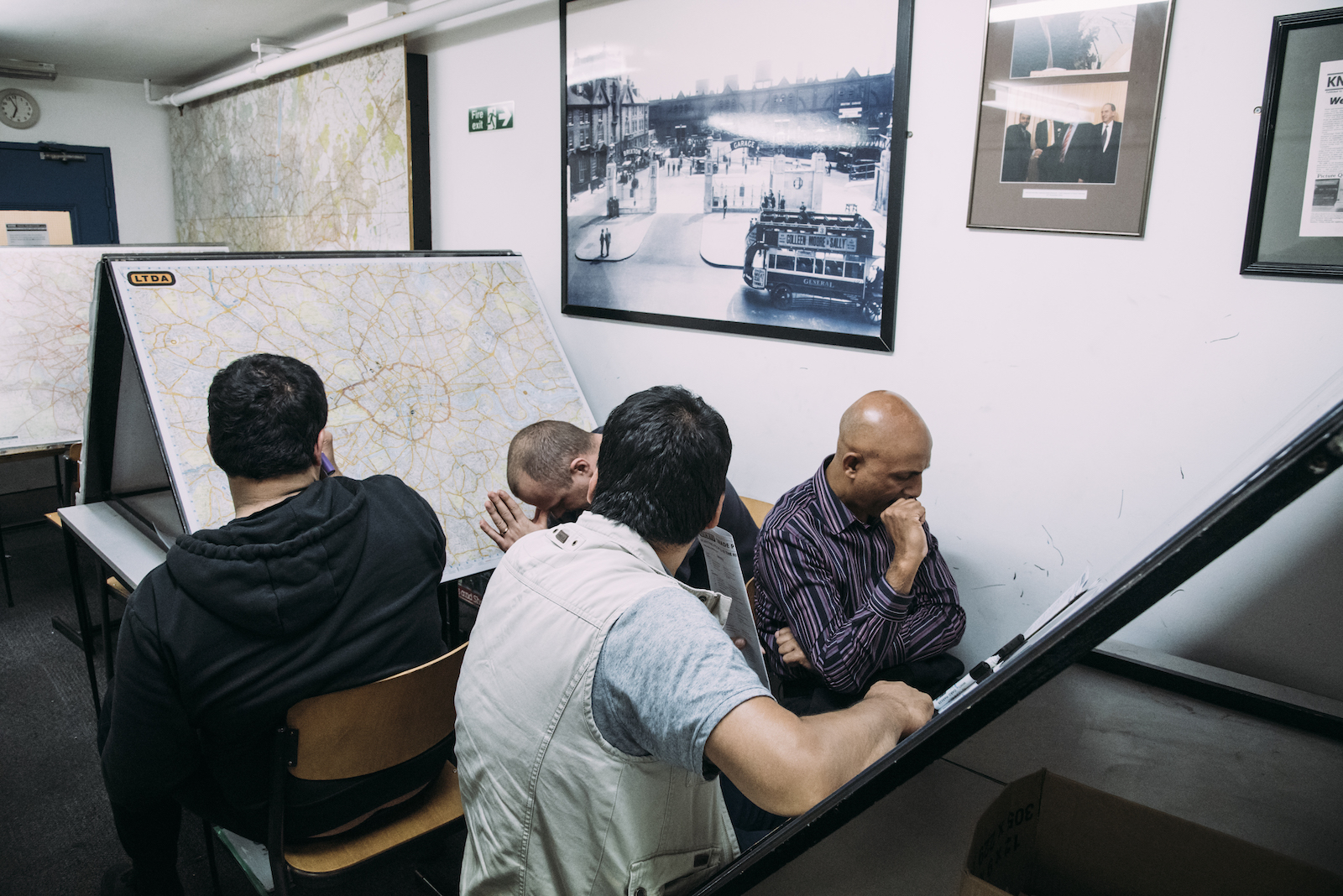 Aside from being all consuming, the Knowledge has been getting harder. London has never been more complex; there have never been more railway stations, more hotels, more restaurants or more points of interest a passenger may ask for. The increasing amount of cycle lanes is changing the flow of traffic and the number of restrictions on the roads, which is something people who study for the Knowledge have to know. One of the girls I interviewed had an "appearance" (what the exams are called) and told me she was asked "Ascot apartments" to "Sukiyaki Tei Sushi" and then "Zeigfeld Von Underbelly" to "Meat Liquor". 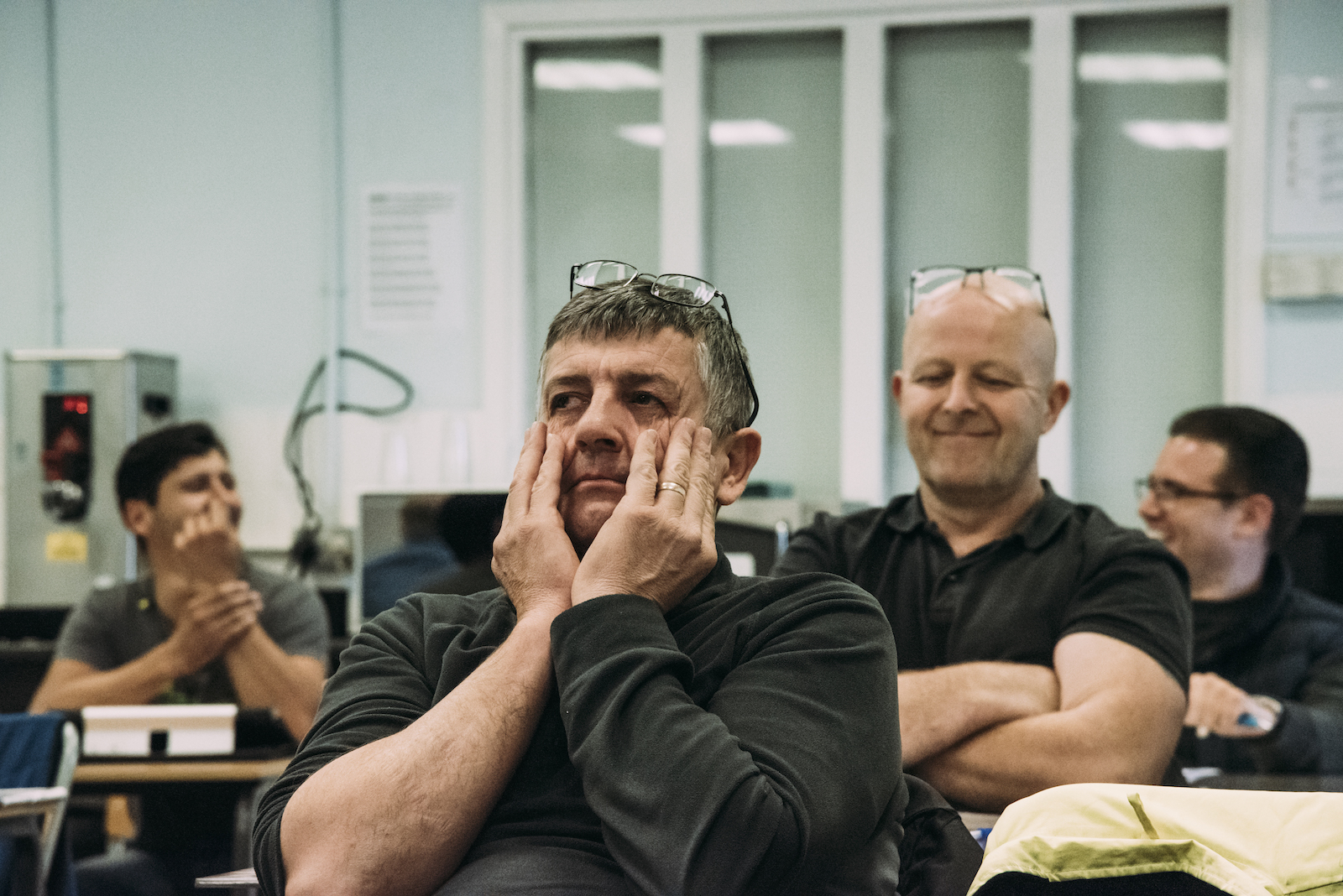 While the Knowledge has been getting harder, the challenges facing black cabbies have been multiplying. People make it out that there's this big Uber vs Black Cab war, and while there's certainly animosity there, it's reductive to think that is the only challenge cabbies face. The night tube, the imminent opening of Crossrail and the huge increase in cyclists have all caused fundamental changes to the city, and also to the number and type of fares cabbies get. As one said to me, "Once Crossrail comes in I'll never again get a fare to Heathrow." 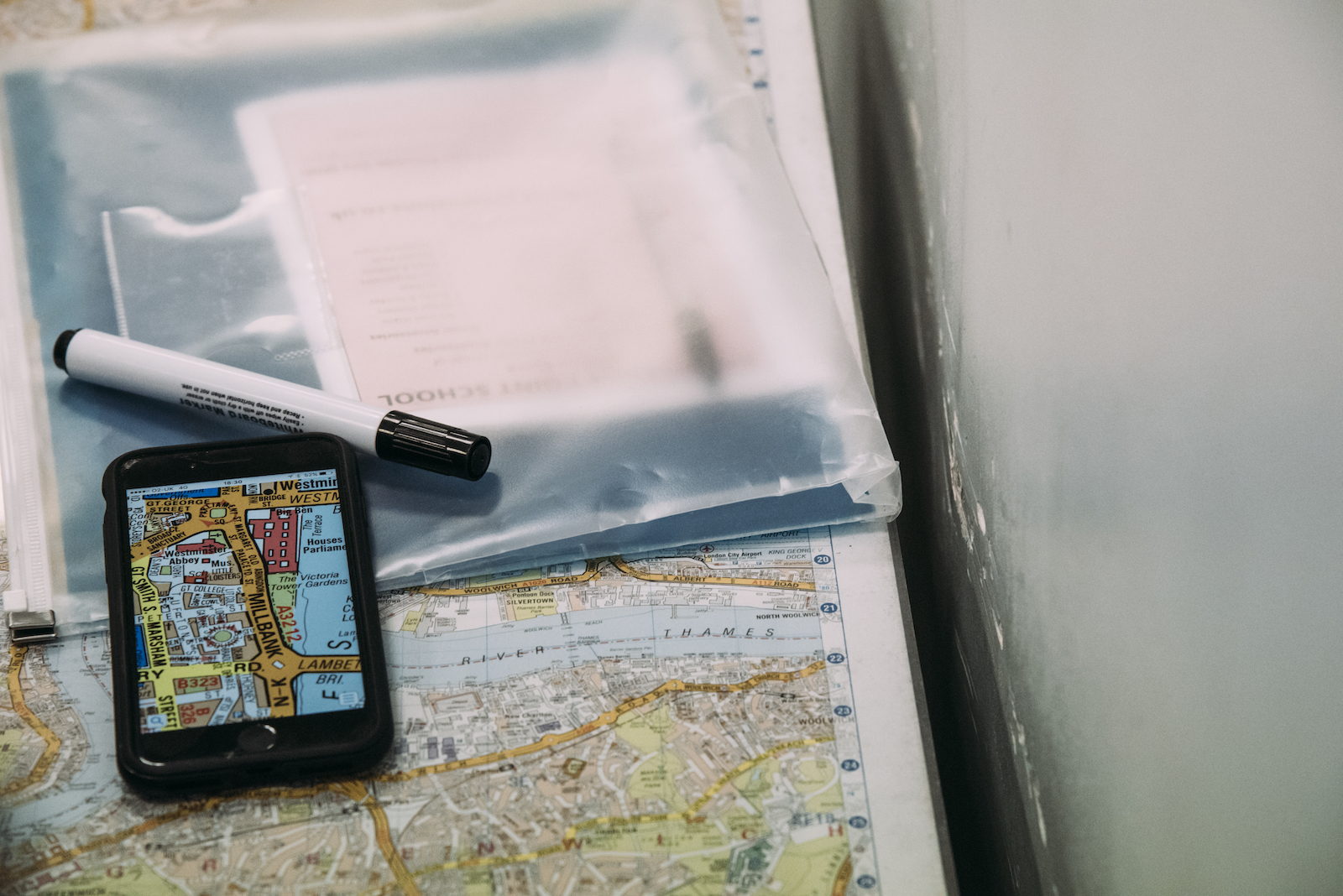 There's a pretty interesting interplay with technology in the way that Knowledge Boys and Girls study for the exams. There are a number of apps that exist which help them study for the Knowledge, and apps that help them draw the perfect routes. A lot of people use Google Maps Streetview for roads they haven't yet visited in person, to poke around and see if there are any points of interest that might come up or that might help them study. There's an obvious irony in that, but then it's also pragmatic to use all the tools available. 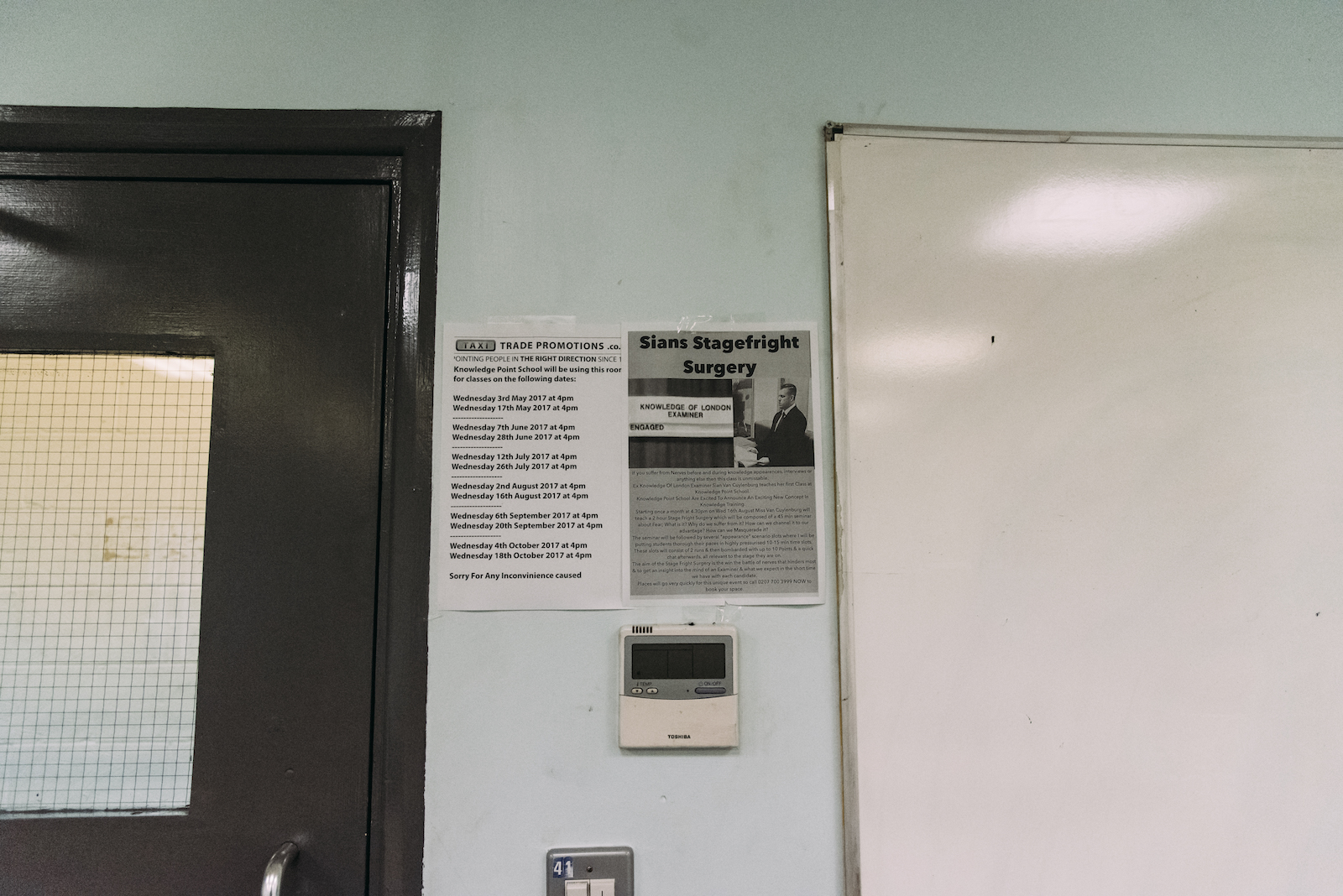 The Knowledge is assessed by exams called "appearances". As the name suggests, examinees go in person to the Carriage Office and sit down with an examiner in a one-on-one session. The students are expected to turn up well dressed, punctual, with their shoes shined and their hair neat. In total it takes at least two years to pass the Knowledge because the exams are divided into three categories; a series of exams every 58 days, which if you pass then goes down to 28 days, and then 21 days. Each level gets harder, and the time you have left to learn more about the city also decreases. If you fail more than two exams on any of the levels you get "red lined", meaning you start the series again from the start. If you've already had to restart once, you go back a series. Conquering your nerves and being able to confidently run through your routes is therefore as much a part of the Knowledge as the work done in front of the map or on the bike. 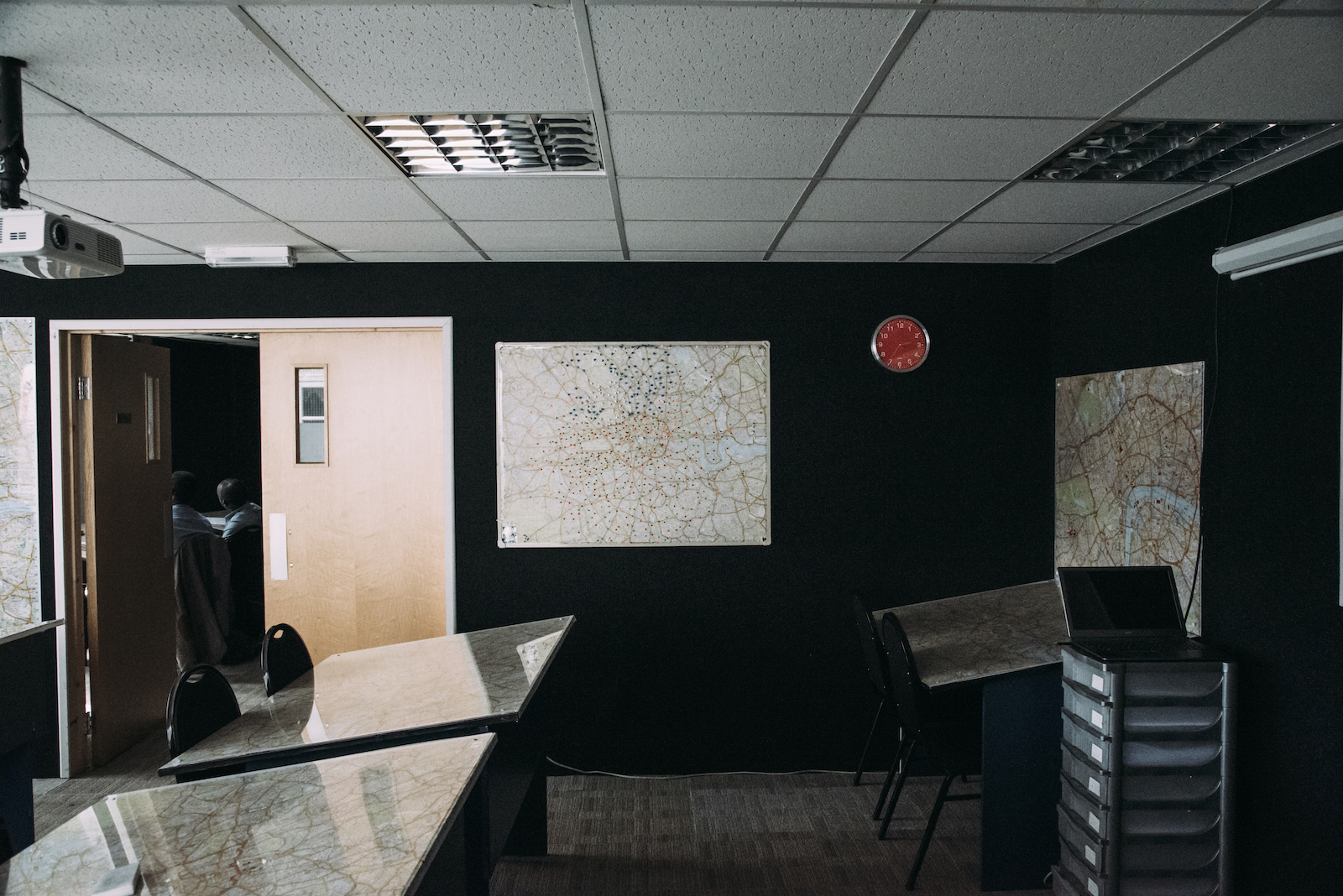 The examiners all have their own personalities, and there is a lot of talk in the Knowledge schools about who is the hardest. There are people who stand outside of the Carriage Office, where the appearances happen, who interview the students who have just come out from their exams. They take down the name of the examiner and the points they called that day, and these are then put onto sheets and made available at the Knowledge schools. This way, the students have a rough idea of who is calling which points that week, and then try to second guess what may or may not come up in the next exam. It's an inexact science, a 2k17 alchemy. 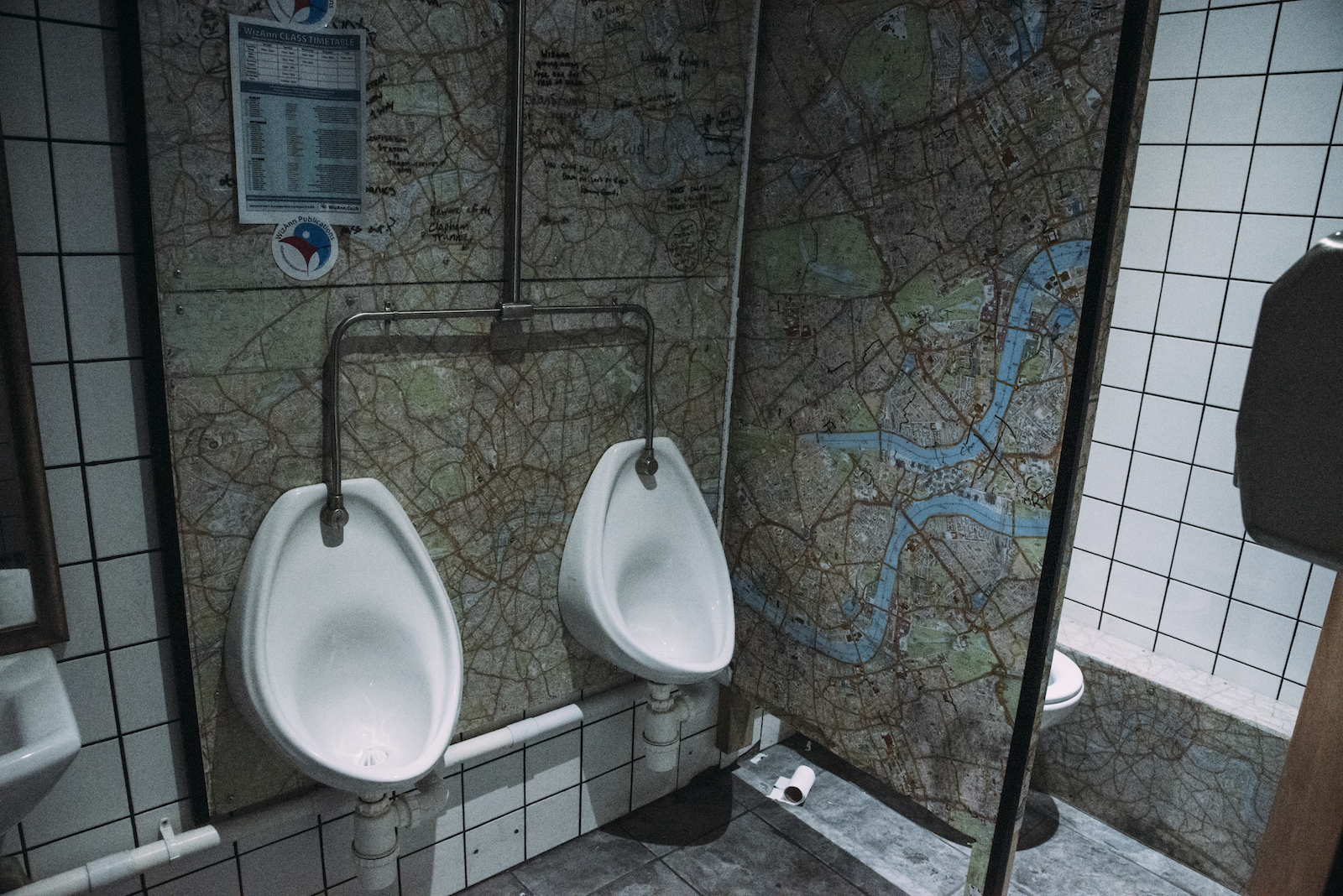 I wasn't taking the piss when I said the map is everywhere. 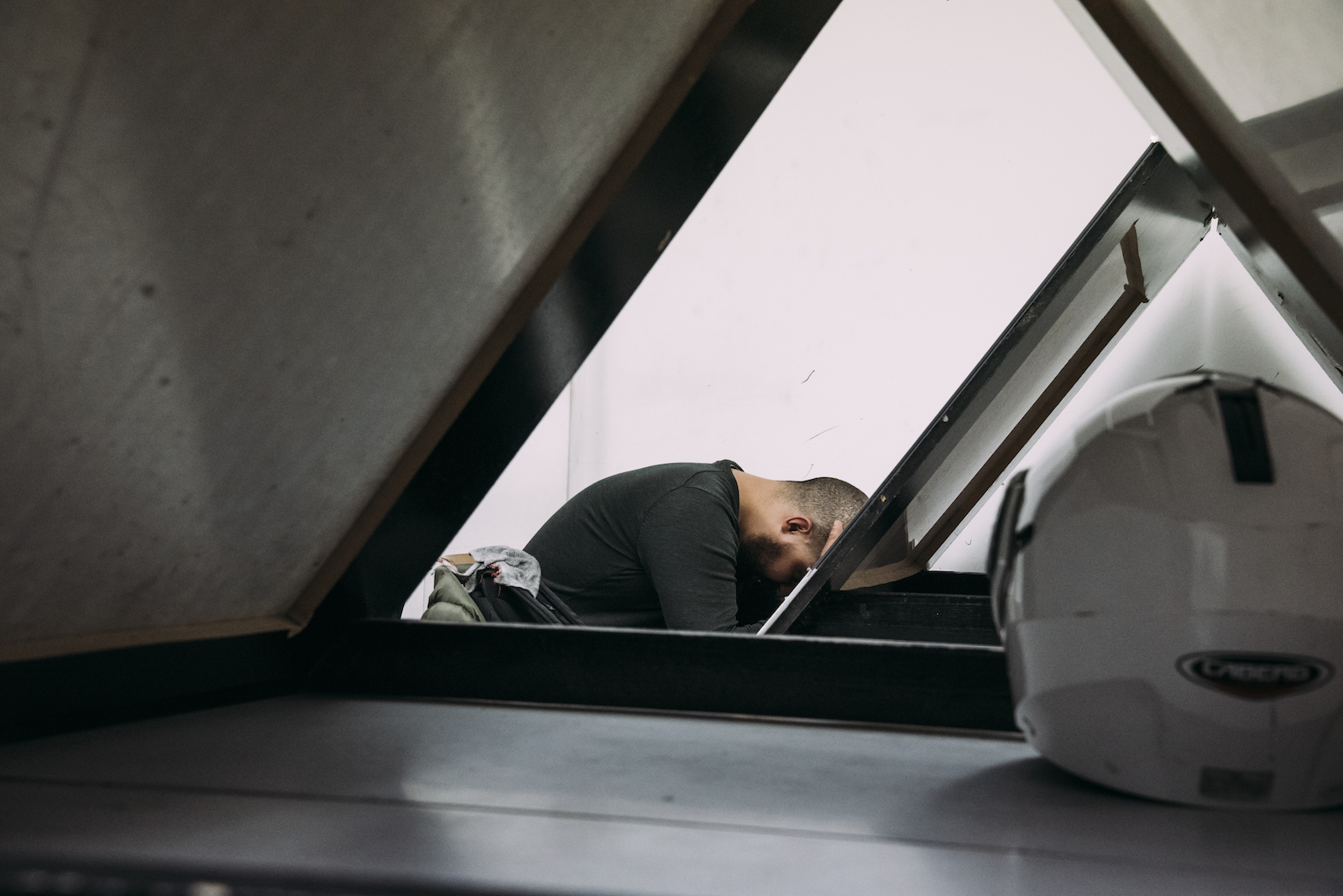 Studying for the Knowledge changes the physical structure of the brain. Researchers at UCL have used MRI scans to show that the Hippocampus of people who pass the Knowledge grows by over 25 percent, and the neural pathways around it also noticeably strengthen. 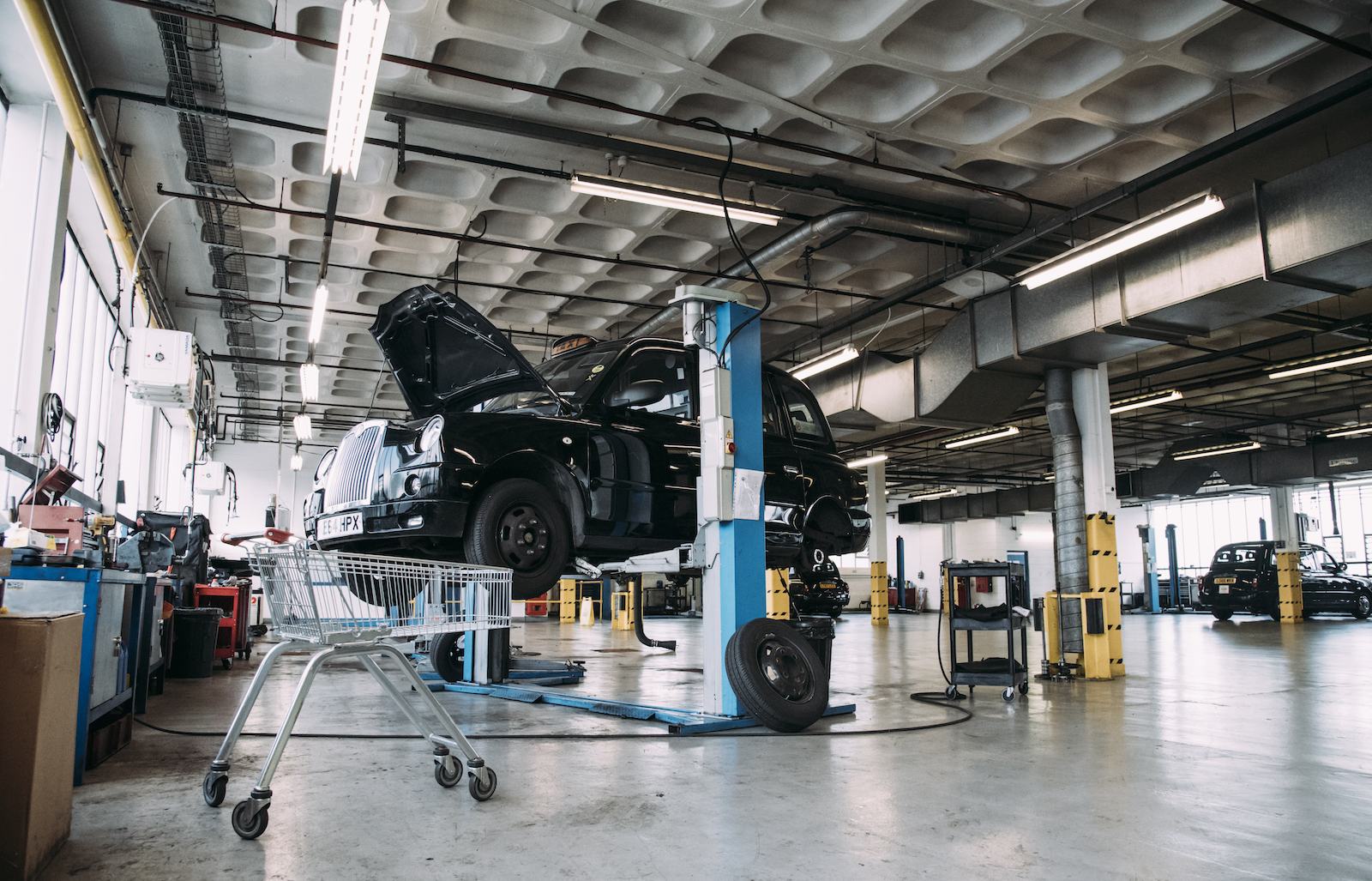 For me, what became apparent during this project was that the Knowledge is a metaphor for all knowledge in the digital age. The same arguments made against people studying the Knowledge – that Google Maps can do the same thing, that Uber is a better alternative or that driverless cars will render them obsolete – can be said about almost anyone in any industry. I've got lots of friends who are studying to be chartered financial accountants or similar, and they're just as at-risk, but no one seems as comfortable to point that out.

I think there's something to be said for learning for learning's sake. Other than the fact they're physically altering their brains – retired black cabbies have one of the lowest rates of Alzheimer's on Earth – they also come to truly know the city in a way that someone who just navigates it using a phone never will. The question ultimately becomes whether or not we value having knowledge of something that we have earned, and which becomes inextricably a part of us, but that is bounded by the limits of our mental capacity, or whether we are more comfortable with an infinite amount of knowledge which exists apart from us in a device and dependent on our ability to access it.

vice.com
Knowledge Schools London
If you notice an error, highlight the text you want and press Ctrl + Enter to report it to the editor
No rates yet
4 views in january
I recommend
No recommendations yet
Telegram
Your recommendation is submitted.
You have already recommended that.
If you have a minute, please rate in more details